$3 Million Verdict Issued To Family Due To Serious Birth Injuries 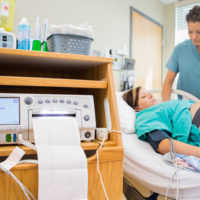 In September 2017, a jury awarded one family $3 million against an obstetrician who forcefully pulled a baby out by his head during delivery, causing serious birth injuries (permanent nerve damage to the baby’s shoulder).

In forcefully pulling the baby out when his shoulder was trapped behind his mother’s pelvis, the doctor ended up ripping two of the shoulder’s nerve networks and overstretching the others to the point of being unable to function.

Although the child has subsequently undergone surgeries, he is still unable to use his arm properly. He cannot perform basic everyday functions such as zipping his pants, riding a bike, touching his stomach, or bringing his arm behind his head. Several of his fingers also twitch uncontrollably and his right arm is four inches shorter than his left.

The lawsuit specifically alleged that the obstetrician—Dr. Peter Wong—failed to disclose the risks associated with the procedure to the mother, who had gestational diabetes while pregnant.

This particular case was important in that it occurred in a state where medical negligence lawsuits like these typically get settled behind closed doors and juries are hesitant to award large verdicts.

Still, in cases where a child has a life-altering injury—like this one—awards are typically at the higher end precisely because the victim will likely suffer with the injury for the rest of their life.

That being said, it took more than nine years for the damage award, arguably causing a hardship on the family involved.

A History of Negligence

Records demonstrate that Dr. Wong has previously been sued for medical malpractice in a case that was settled out of court. In addition, the state Board of Medical Licensure and Discipline previously reprimanded and fined him for prescribing too high of a dose of an abortion-inducing medication. Shouldn’t the current hospital have taken this into account and decided not to hire him?

Officials with the Division of Professional Regulation have still given no indications as to whether the incident will affect Wong’s medical license, which is due to expire in 2019. However, unfortunately, even verdicts like these rarely affect doctors’ abilities to practice medicine.

When a family suffers from a birth injury, not only does the child suffer from pain and sometimes permanent disfigurement, but their lives are now burdened by the financial strain and stress of having to obtain medical care and support for the disabled child. Some of the cases where juries have awarded similar or higher damages have involved doctors causing brain damage after failing to properly treat a newborn baby’s jaundice—which lead to cerebral palsy and other lifelong complications—as well as emergency room doctors and nurse practitioners releasing toddlers to early and thus contributing to the toddler’s death days later.

If your family has been harmed by medical negligence and/or a birth injury, contact our experienced Fort Lauderdale birth injury lawyers at Friedland & Associates today for information and assistance.