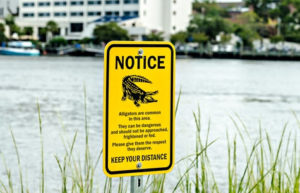 Most people remember the terrible story of the child who was killed by an alligator this last summer at the Disney World Resort in Florida. At the time of the occurrence, there weren’t any warning signs notifying visitors that alligators lived in the water, which is  arguably a serious premises liability issue, especially since this wasn’t the first time that a child was injured or killed by an alligator on that same private property.

Although some counties like Miami-Dade are now installing alligator warning signs to alert visitors to the danger, still, given the presence of alligators in so many of Florida’s bodies of water, you would think that warning signs would be posted everywhere to warn tourists and residents alike. Without them, so many people are placed in danger each year.

Although many residents in Florida know that they should keep children and pets away from any and all bodies of water, many of the individuals who stay at Florida hotels are non-native and are otherwise unaware of the various dangers there are the ones who become victims.

When you are injured or killed on someone else’s property (including government property) because the property owner failed to exercise reasonable caution to ensure your safety, this is a premises liability issue. Property owners (like Disney) need to inspect their property and either address any dangerous condition that could harm a visitor/guest, or at the very least, make sure that those visitors are warned about the danger.

While there are instances when landowners aren’t necessarily liable for attacks by wild animals, there are also exceptions to this rule. Hotel guests are considered to be “invitees” under the law, and that means that the landowner (Disney) has a duty to keep the property in a reasonably safe condition, warn of any concealed dangerous (which they should know about but are unknown to the invitee and cannot be discovered through the exercise of due care). In other words, a landowner can be found negligent if they knew or should have known of an unreasonable risk of harm posed by a wild animal on their premises, where patrons cannot be expected to realize there is danger.

In addition, signage is critical. Although Disney did post “no swimming” signs, the child’s death and other incidents were not due to swimming; these children were simply playing along the beach. There had been previous incidents with children and alligators there, indicating that Disney was on notice that alligators were present and could harm people. Arguably, Disney had a duty to warn of alligators in the lake, yet it failed to do so.

If you or a loved one has been the victim of a negligent hotel or other property in Florida, we can help. At Friedland & Associates, we are committed to making wrongs right by holding property owners accountable for the damage caused in a premises liability injury. Contact us today for a free consultation.