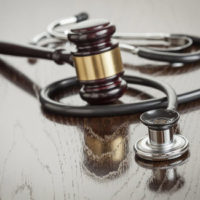 In late March, news broke of one Florida mother’s nightmare discovery, 14 years after giving birth: Due to medical malpractice, as she was about to give birth at Naval Hospital in Jacksonville, the epidural needle broke off and been left in her spine for many years, causing massive pain and complications.

Although it is fairly obvious to an anesthesiologist when an epidural needle has broken off in a patient (because these needles are marked at the end and the proper medical protocol is to look at the tip when the needle is pulled out to ensure it is all there), she was not informed by the medical personnel involved when it happened; thus, the needle was left in for a decade and a half, causing constant pain and nerve damage. Only after receiving a CT scan was the three-centimeter needle found sticking out of her spine. She has since suffered from chronic left-sided sciatica, as well as hip and lower back pain for all of this time as a result of this unmentioned mistake.

When an epidural is properly administered, it is placed halfway into the spinal canal in order to inject numbing medication. In this case, however, the provider jammed the needle across her spinal canal and into her spine. The needle is nine centimeters long, and doctors found three centimeters in the patient, indicating that a third of the needle broke off—an occurrence that is very obvious in the moment. Instead, they chose to look the other way, causing her massive medical complications and leaving her in severe pain for years on end.

To make matters worse, her current doctors have informed her that it is too risky to remove the needle because of how long it has been in her spine, which means she has to live with this damage for the rest of her life. She is now claiming that the hospital staff not only failed to provide her with proper anesthesia care and treatment, but also failed to properly insert the spinal anesthesia needle and inform her of what happened and remove the needle in a timely fashion. The failure to inform the patient of what happened is a huge oversight that will likely make her malpractice claim successful: Not only is malpractice like this abhorrent, but an unethical cover-up is typically completely unacceptable to the courts, and frankly, constitutes egregious, gross malpractice.

Negligence after the Incident

In addition, she arguably would have discovered the issue had she been provided with a CT scan prior to now. Instead, in the years after this incident, she experienced doctors continually telling her to simply use back patches and take Motrin; and that her back condition was “in her head.” She is now on medication, taken three times per day, which significantly slows her down.

In cases like these, you as an injured patient have every right to file a lawsuit alleging fraud, malpractice, and negligent concealment. Families of active-duty members (as was this woman’s husband) can sue the government for negligence under the Federal Torts Claims Act. Contact one of our experienced Florida medical malpractice attorneys at Friedland & Associates today to find out more.