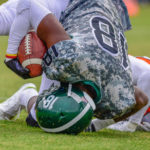 By lee@yourfightourbattle.com | Posted on February 7, 2017

A new study released on January 19th by University of North Carolina and the Centers for Disease Control and Prevention found that brain-injury deaths in high school football players are on the rise. While more and more attention has been given to the incidence of concussions in football players, less research has been done… Read More »